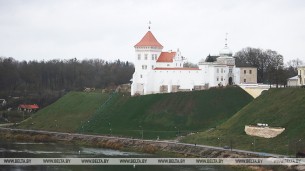 Archaeologists continue exploring the palace on the grounds of Old Castle in Grodno and have already discovered the 16th-century floor near the museum ticket office, BelTA learned the Culture Department of the Grodno Oblast Executive Committee.

The photos of the discovery have been posted on Facebook.

Comprehensive scientific research on the castle is in progress. “It is important to make design solutions for the second phase of the Old Castle restoration project. The work on the project is already underway,” the department said. Archaeological research continues both on the facade of the palace and inside it.

Archaeologists carried out probes outside and inside the building and presented the results at a scientific conference at the Grodno State Museum of History and Archeology in late April. The inventories of the 16th-18th centuries were reviewed then too.

Restoration of one of the oldest castles in Belarus began in 2017 and runs several phases. The first phase envisages work on a middle tower and a stonewall, and also on necessary infrastructure. It is expected that the main exposition of Old Castle in Grodno will open its doors in the summer.